WINNERS IN THE AB CONTEST

Staff member
BEST IN SHOW Alex Wenchel for his 10 g planted tank with grass carpet and overhanging cryptocoryne and with chili rasboras.

Class 5 THEMED TANKS
FIRST PLACE Jeff Fredrick for his 10 gallon that looked like a tank and was themed: THE FISH TANK
SECOND PLACE Tammy Hine for her octagonal tank that look like a bird cage and was themed: THERE'S SOMETHING FISHY ABOUT THESE BIRDS
THIRD PLACEShawn Leffler for his tank with theme: EASTERN WARRIORS


If you have better descriptions of the tanks than my pathetic attempts above, please reply with them. Thanks.

And I want to thank all who participated in this event. We had an outstanding turnout and I know if you participated you actually learned something more about keeping fish and plants and keeping them healthy. It is a lot of work but it really is one of the best focal points of the convention.

As for the PEOPLE'S CHOICE AWARD, voting was fantastic at 110 votes cast. And it really was a contest. The top vote getters were within 3 votes of each other. SO maybe if you had voted, if you did not, your vote would have changed the results.

As for voting, if there were more than one ID on the blue tape, you could have used any of the IDs to vote with. All ID are connected to the same person, same tank.

Thanks Frank! I think it's absolutely worth setting up a tank or two for the aquarium beautiful competition. Not only was it fun, but it gave me a chance to meet a lot of new people while setting up. In the future, I think I'll concentrate on one tank, instead of trying to do so much. I had a lot of fun though. Here are some more details on my entries. 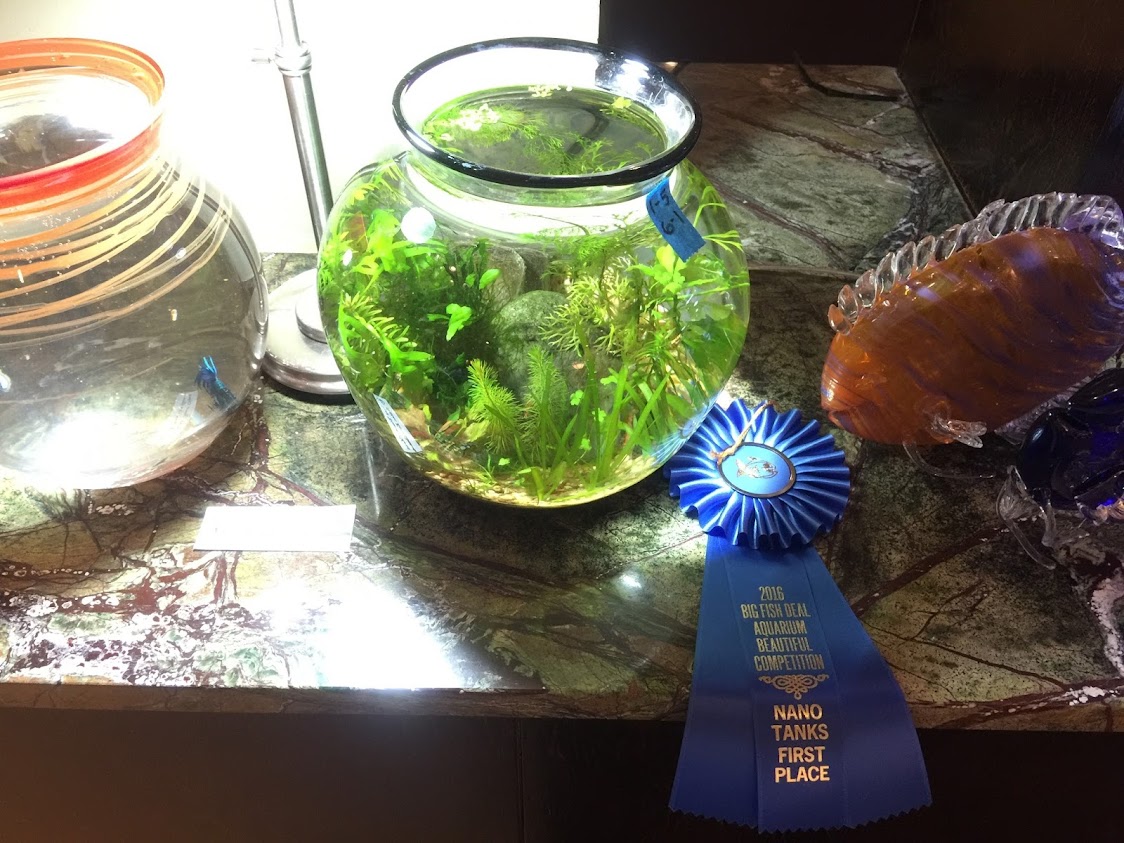 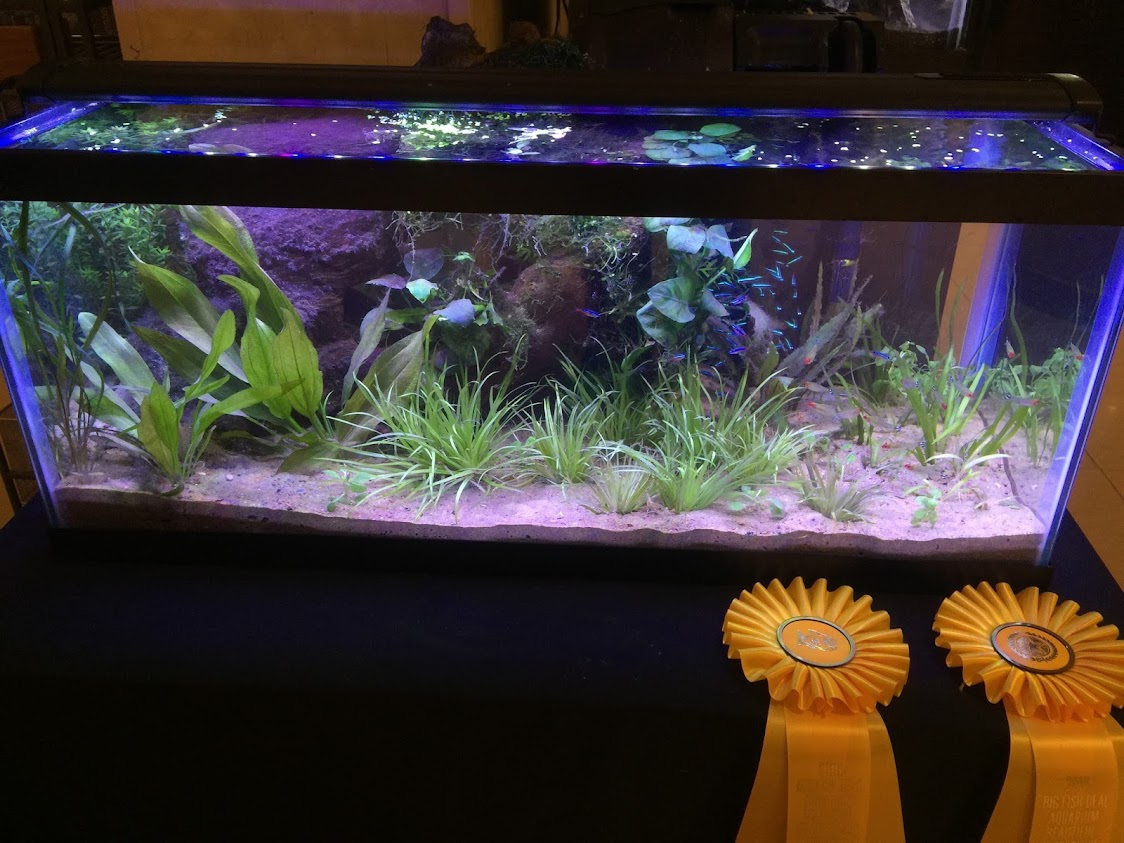 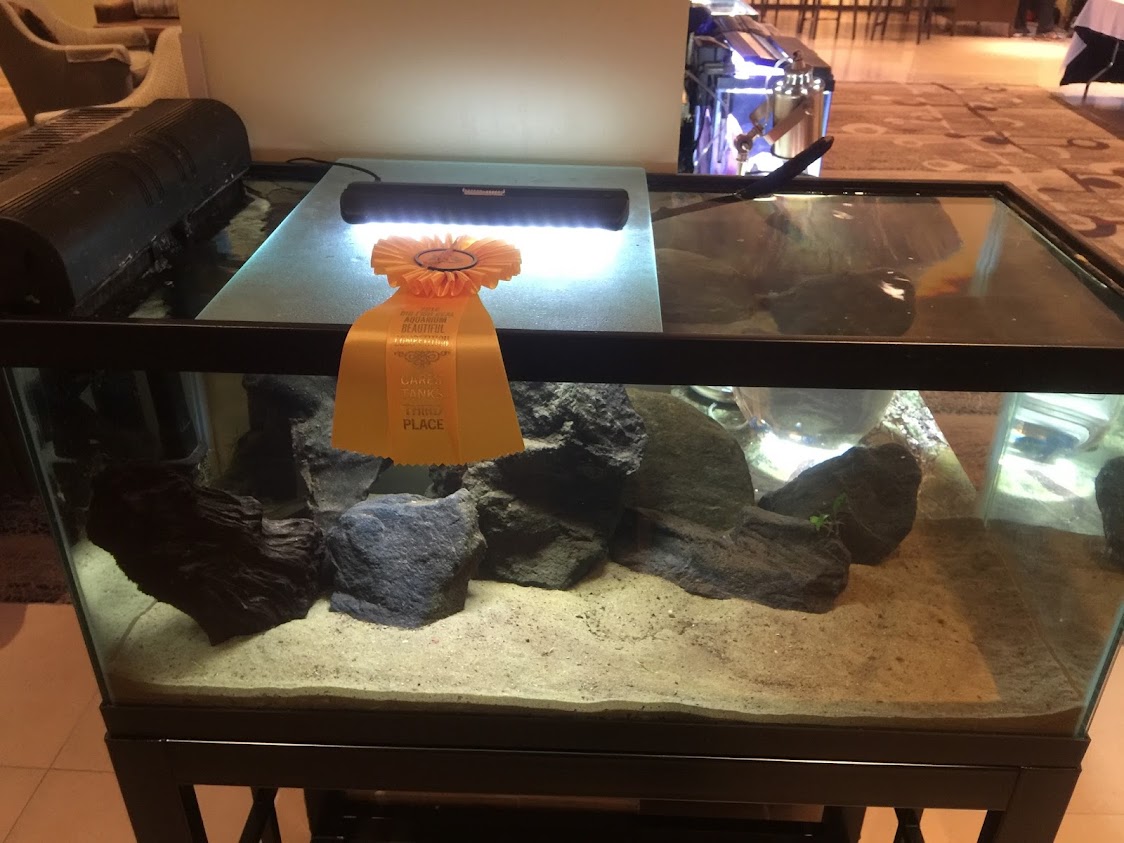 I was mad at myself for not setting up all the rocks in this last tank in the beginning. The last two I added Saturday morning and after that, the hunters wouldn't come out. Before that they were lively and playing. Shame on me!

Staff member
Congrats to the winners! There were some really awesome tanks on display this year!
P

My favorite moment was when the little boy won the "tank" tank in the raffle. Priceless.

Staff member
Thank you Frank for organizing this event. Also for challenging BOD members to participate as I definitely wouldn't have done with out the kick in the pants. To my surprise, I really enjoyed setting this tank up. I didn't realize how hard it was to get one of Viktor's Sagittaria cf. Subulata plants to stay! The darn thing kept sticking to my wrist after positioning it just right. It made me appreciate the other real planted tanks all that much more.

Those things were a total impulse/had to have buy from petsmart. I did a project with my third grade classes and we talked about them. A couple days late I spotted them on the clearance rack!?! Of course I bought them. No brainer. They sat in my classroom until it came time to set up the tank. Third graders loved them. I drilled a hole through the pot (on left) for the crypt's roots to grow out.

Staff member
Thanks to Clelia O'Leary, yes, one of Rachel's daughters, who took pictures of all the AB tanks, we can show them all.

I tried to ID them in the text but it did not work for me. SO I will put 10 pictures in as many replies as needed.

Staff member
Next 8: enjoy, and more to come:

Staff member
And here is another 10 pictures that Clelia took at the contest. THere are some duplicates but some new ones too.

Staff member
ANd the last 5 include many winners. In total there are 43 pictures in this series.