Probably one of the most talked about topics on the forums, equipment wise, is the aquarium heater. How do I heat a tank over 75-gallons when the biggest heater my store has is 300wt? What brands are best? And -- the biggest concern -- how do I prevent a failed heater from cooking my fish tank.

I've been super critical of most heater brands: they're all basically the same, and they're all built to fail. The more generous ones come with a 1-year warranty, and I've emphasized my belief that if you're using a heater that's more than a year old, you're playing russian roulette. It will fail, it will cook your tank.

Cobalt Aquatics changed the game with new circuit board controlled heaters - no metal strip to spontaneously fuse. Unfortunately, their heaters are expensive, and somewhere along the lines, something changed. Multiple people have reported them changing settings, overheating, and worse, popping. These are typically heaters that are old, and like any heater, I recommend replacing them annually. However, given the additional price, its hard to justify an electronic controlled heater when it doesn't, well, do anything any differently and requires just as frequent replacement. They're great heaters, and I would recommend them over other brands.

Bulk Reef Supply has heard the complaints of customers, and understandably, with reef tanks being among the most expensive and sensitive aquariums out there. Heaters sticking or otherwise failing can be devastating to a reef tank, even without changing the temperature but a few degrees. They've released a new line of Titanium Heaters, specifically aimed at larger tanks. The heater is in three parts, allowing the consumer to replace each part independently.

The heater itself carries a three year warranty. Its a titanium heater, and incredibly well sealed. They're heavy, bulky, and solid. If you hit your tank with it, it'd probably break the tank before the heater broke (don't do that!).

It has an independent controller, which is fully programmable. It has a great hysteresis, which allows you to control when it turns on and when it shuts off. Most heaters, you set them at 76, and a little below that, they turn on, a little above they shut off. This means they're constantly turning on and off, which wears out the cheap components. Even expensive controllers, the more they turn on and off, the more likely they are to fail. With a freshwater tank, where minor fluctuations aren't important, you can set the heater to turn on at 72, and off at 76, meaning it'll never cycle as long as the temperature is between those points: fewer on/off cycles, longer life.

It has a separate temperature probe, as well.

Best of all, it has an integrated alarm. If it fails, either off or on, it'll SCREAM at you. BRS is working with Elon Musk to make it fart at you instead, but currently it beeps.

The heaters are available at: 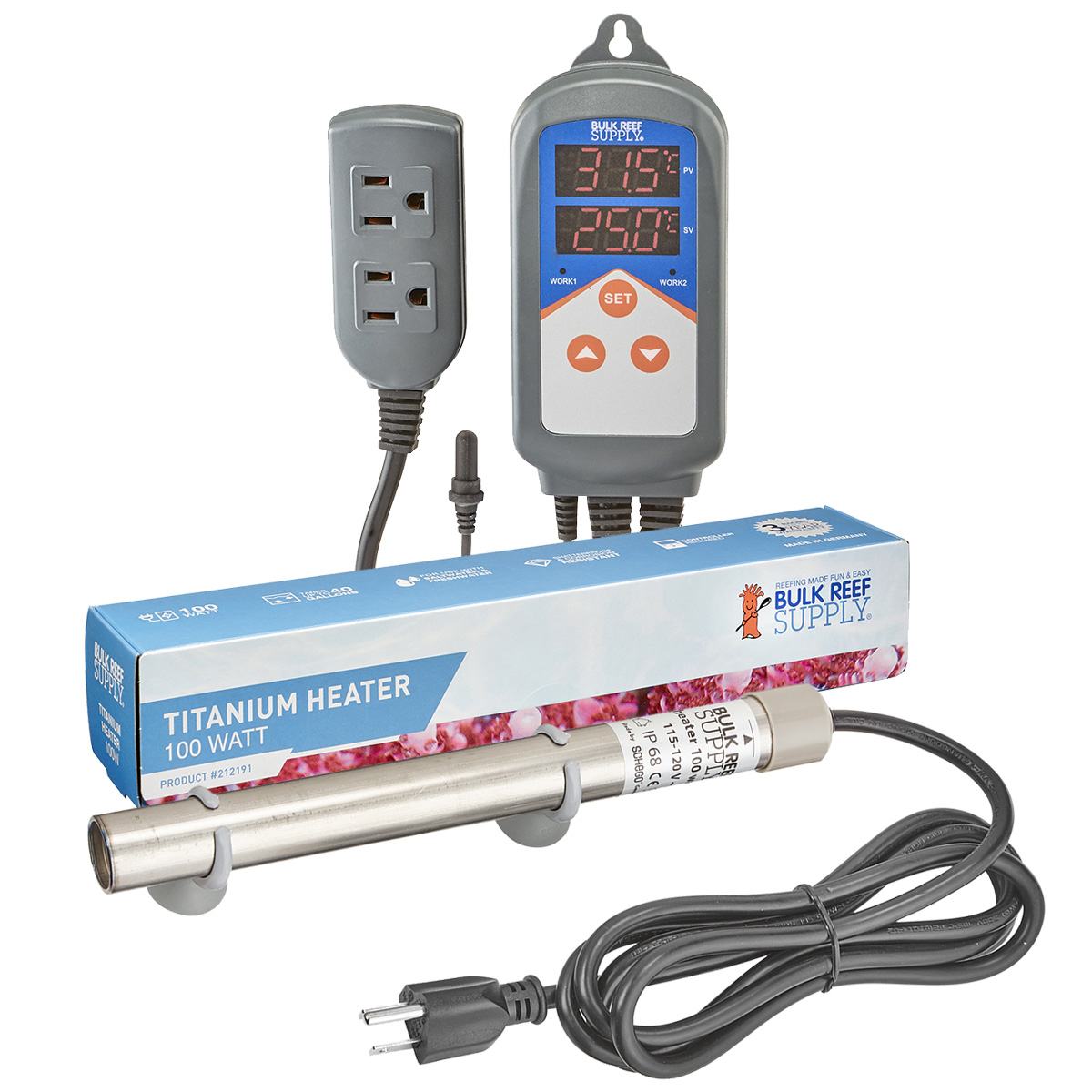 Know and Trust Your Aquariums Temperature Keeping the temperature of your aquarium stable is one of the easiest things that can be done without having to invest in expensive electronics and fancy heat exchanging systems. The Bulk Reef Supply Titanium Aquarium Heater System is a complete...


I am going to do a Group Buy on them, if anyone wants to go in on them. Delivery to the November meeting, no shipping costs. (You can also pick heaters up here, or at PVAS, I'm CCing this post.
Order deadline is October 29th. You can e-mail me, BatfishAquatics@gmail.com, with your order -- prices as per the BRS website.

Payment must be made by PayPal to JoshuaWiegert@gmail.com (NOT to BatfishAquatics; I'm not making any money on them: its not a business sale. Anyone who PayPals batfish will get a nice thank you note and no heater. Unless I'm feeling generous, in which case I'll simply put the 'unbreakable' part to the test with your heater and your kneecaps. )

Now is a good time to invest in a new heater.
Winter is coming.

I have a bunch of stuff to order from BRS and I won’t be able to make the November meeting so I won’t be able to get in on the group buy, but thanks for letting me know this product exists. I’ll definitely pick it up for my 135g.

Staff member
This is actually, basically, the set up I assembled for my 210 using products purchased from Bulk Reef Supply. I added a 2nd controller as a redundancy, just in case one was faulty. We recently had an ich outbreak in that tank and were able to treat it by raising the temperature (no meds). I've found the controllers to be much more reliable for keeping the tank at an even temperature, plus you can place the probe(s) at the ends of the tank and the heater in the middle, which means that the furthest places from the heat source have to reach the set temperature before it turns off.
You must log in or register to reply here.
Share:
Facebook Twitter Reddit Pinterest Tumblr WhatsApp Email Link