Tired of failing heaters, even the Jagers aren't what they used to be.
What brand Temp Controllers do you use. Looking at Inkbird but there's so many models. Looking at the ITC 306t or 308, 308s (has detachable probe) Are they reliable?

Inkbirds are fairly reliable. I've had some issues where the temperature isn't great on them (they say it's 78, but it's actually 72), though they're usually calibratable.

Everyone loves the WiFi ones, but to me, that's one more device crowding my network, and one more thing that can get fubarred: I'm happy with a wired one.

I like the detachable probe because it's also replaceable. They do go bad and need annual replacement.


As an aside, I think of heaters like the brakes on your car. For the most part, with my car (tank), anything that goes wrong isn't going to hurt me. Bad alternator, lousy transmission, whatever, most likely, I'm just not going to go anywhere and going to have a lousy day until I get fixed it. Same with the aquarium: filter, lights, whatever, I'm okay for a little while. But, if I'm driving along and my brakes go (the heater fails), well, we've all seen those movies where the guy is driving through the city, but some fiend has cut his brake lines, and now he's suddenly at the edge of a cliff....

Just like brakes, you should be replacing them regularly, and you should think of them as expendable. You can pay more for better brakes, but you still want to replace them after so many miles -- and you can pay more for a better heater, but you'll still want to replace it regularly. I replace all of my heaters once a year. It's an expense, yes, but ... I've had enough of dead pets.

Also, if you don't feel like giving more money to the world's richest employee abuser: 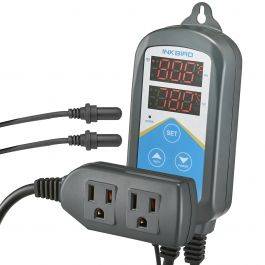 I’ve been using the 306T model on a few aquariums and I really like them.
J

agree with josh, safe bet is to replace yearly, better option that replacing hundreds of dollars of fish and years of growth-just my opinion.

Staff member
I use InkBirds pretty extensively, at the recommendation of

JLW . I also use under-sized heaters (per recommendations from Chuck Davis). Most 50 watt heaters will handle 20 gallons fine, even if they're only rated for 10. What they won't do, is boil your fish in a matter of hours if they get "stuck on." Even with a controller, I'd recommend replacing the probe once or twice a year and having an old fashioned in-tank thermometer to check it against.

I also use thermometers that sit IN THE TANK. There are some great, relatively cheap, magnetic mount ones. For bigger/longer tanks, if I can, I use two undersized heaters - if one fails, it won't cook your fish and it's unlikely that both will fail at the same time. I've lost fish to heater malfunctions and it sucks. The one brand I will NEVER purchase again is Cobalt. I've had those heaters electrocute fish, I've had them set themselves to the highest setting, even though it's supposedly impossible, and I've heard of others having them explode and leak toxic goo.

I don't replace my heaters annually, but I probably do replace them every 2-3 years as I notice them staying on more than they should, or tank temperatures not being where they should be. I also use in-tank thermometers and check them daily.

I find they're often a little cheaper from BRS than from Amazon and the customer service is great if you have an issue with one.

Thanks for all the input.

So I did buy an Ink Bird 206T $29.95 and used the ice-water method to check the calibration, it read 32.5F, so I recalibrated -0.5F. I did find out my that my Lifeguard Big temperature thermometer read +2.5. I also check everything with a old fashioned glass Thermometer too. So far it keeps the tank temperature with in 1.2 degrees F.

I also purchased a replacement probe $11.95 , I found one that had the jack part which will be nice since the 206T was hardwired. when it needs replacing I'll just solder the jack and future replacement will just be plug in.

Has anyone used just a heater element with the Inkbird instead of a compete heater (Jager) ? if so what brand? 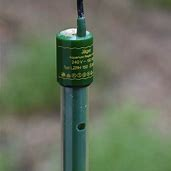 I've been using the Finnex titanium heaters with inkbird conrollers.